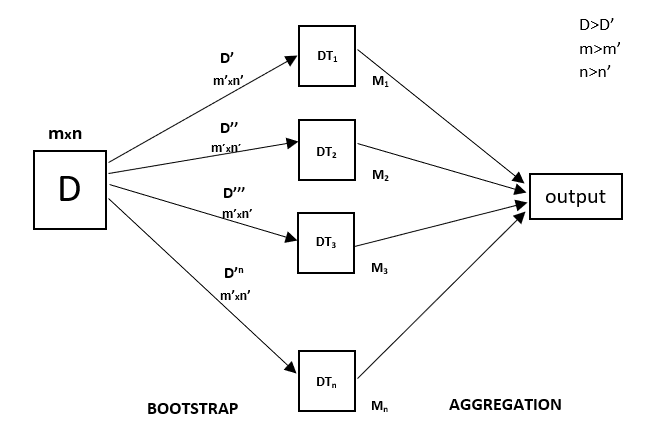 Definitions:
Decision Trees are used for both regression and classification problems. They visually flow like trees, hence the name, and in the regression case, they start with the root of the tree and follow splits based on variable outcomes until a leaf node is reached and the result is given. An example of a decision tree is below:

What is Random Forest?

The name “Random Forest” comes from the Bagging idea of data randomization (Random) and building multiple Decision Trees (Forest). Overall, it is a powerful ML algorithm that limits the disadvantages of a Decision Tree model.

To make things clear let’s take a look at the exact algorithm of the Random Forest:

In the picture below you might see the Random Forest algorithm for Classification.

To start with, let’s talk about the advantages. Random Forest is based on the Bagging technique that helps to promote the algorithm’s performance. Random Forest is no exception. It works well “out-of-the-box” with no hyperparameter tuning and way better than linear algorithms which makes it a good option. Moreover, Random Forest is rather fast, robust, and can show feature importances which can be quite useful.

Also, Random Forest limits the greatest disadvantage of Decision Trees. It almost does not overfit due to subset and feature randomization. Firstly, it uses a unique subset of the initial data for every base model which helps to make Decision Trees less correlated. Secondly, it splits each node in every Decision Tree using a random set of features. Such an approach means that no single tree sees all the data, which helps to focus on the general patterns within the training data,and reduces sensitivity to noise.

Nevertheless, Random Forest has disadvantages. Despite being an improvement over a single Decision Tree, there are more complex techniques than Random Forest. To tell the truth, the best prediction accuracy on difficult problems is usually obtained by Boosting algorithms.

When to use Random Forest in real life

As mentioned above, Random Forest is used mostly to solve Classification problems. It is worth noting that Random Forest is rarely used in production simply because of other algorithms showing better performance. However, RF is a must-have algorithm for hypothesis testing as it may help you to get valuable insights. For example, the “out-of-the-box” Random Forest model was good enough to show a better performance on a difficult Fraud Detection task than a complex multi-model neural network.

From my experience, you might want to try Random Forest as your ML Classification algorithm to solve such problems as:

In the Regression case, you should use Random Forest if:

For example, Random Forest is frequently used in value prediction (value of a house or a packet of milk from a new brand).

How to use Random Forest for Regression

If you have ever trained a ML model using sklearn you will have no difficulties working with the RandomForestRegressor. All you need to do is to perform the fit method on your training set and the predict method on the test set.

However, Random Forest in sklearn does not automatically handle the missing values. The algorithm will return an error if it finds any NaN or Null values in your data. If you want to check it for yourself please refer to the “Missing values” section of the notebook. Of course, you may easily drop all the samples with the missing values and continue training. Still, there are some non-standard techniques that will help you overcome this problem.

Overall, please do not forget about the EDA. It is always better to study your data, normalize it, handle the categorical features and the missing values before you even start training. That way you will be able to avoid many obstacles.

In general, you should always tune your model as it must help to enhance the algorithm’s performance. As you might know, tuning is a really expensive process time-wise. When tuning a Random Forest model it gets even worse as you must train hundreds of trees multiple times for each parameter grid subset. So, you must not be afraid. Trust me, it is worth it.

You can easily tune a RandomForestRegressor model using GridSearchCV. If you are not sure what model hyperparameters you want to add to your parameter grid, please refer either to the sklearn official documentation or the Kaggle notebooks. Sklearn documentation will help you find out what hyperparameters the RandomForestRegressor has. Kaggle notebooks, on the other hand, will feature parameter grids of other users which may be quite helpful.

When you have your model trained and tuned, it is time to test its final performance. Random Forest is just another Regression algorithm, so you can use all the regression metrics to assess its result.

For example, you might use MAE, MSE, MASE, RMSE, MAPE, SMAPE, and others. However, from my experience, MAE and MSE are the most commonly used. Both of them will be a good fit to evaluate the model’s performance. So, if you use them, keep in mind that the less is your error, the better and the error of the perfect model will be equal to zero.