Classification vs Regression in Machine Learning

by Feeba Mahin
in Articles, Coding

Regression vs Classification in Machine Learning: How they Differ

What is Regression Machine Learning?

Regression algorithms predict a continuous value based on the input variables. The main goal of regression problems is to estimate a mapping function based on the input and output variables. If your target variable is a quantity like income, scores, height or weight, or the probability of a binary category (like the probability of rain in particular regions), then you should use the regression model. However, there are various types of regressions used by data scientists and ML engineers based on different scenarios. The different types of regression algorithms include:

The main aim of polynomial regression is to model or find a nonlinear relationship between dependent and independent variables.

What is Classification Machine Learning?

The different types of classification algorithms include:

In this algorithm, a classification model is created by building a decision tree where every node of the tree is a test case for an attribute and each branch coming from the node is a possible value for that attribute.

This tree-based algorithm includes a set of decision trees which are randomly selected from a subset of the main training set. The random forest classification algorithm aggregates outputs from all the different decision trees to decide on the final output prediction, which is more accurate than any of the individual trees.

The K-nearest neighbor algorithm assumes that similar things exist in close proximity to each other. It uses feature similarity for predicting values of new data points. The algorithm helps grouping similar data points together according to their proximity. The main goal of the algorithm is to determine how likely it is for a data point to be a part of the specific group.

Regression vs Classification in Machine Learning: Understanding the Difference

The most significant difference between regression vs classification is that while regression helps predict a continuous quantity, classification predicts discrete class labels. There are also some overlaps between the two types of machine learning algorithms.

Let’s consider a dataset that contains student information of a particular university. A regression algorithm can be used in this case to predict the height of any student based on their weight, gender, diet, or subject major. We use regression in this case because height is a continuous quantity. There is an infinite number of possible values for a person’s height.

On the contrary, classification can be used to analyze whether an email is a spam or not spam. The algorithm checks the keywords in an email and the sender’s address is to find out the probability of the email being spam. Similarly, while a regression model can be used to predict temperature for the next day, we can use a classification algorithm to determine whether it will be cold or hot according to the given temperature values. 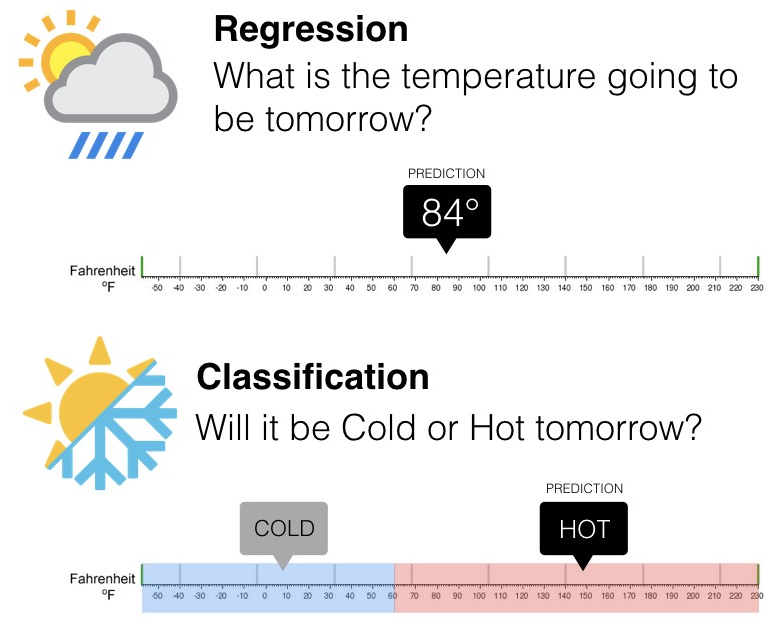