The Kerala Public Service Commission has released the official notification for the post of Excise Inspector-Trainee on 31st December 2019. All those candidates who aspire for these posts hopefully have already submitted the application as Feb 05 2020 was the last date of submission. Therefore, attempt these online mock tests to assess yourself and start preparations for the Kerala PSC Excise Inspector examination. 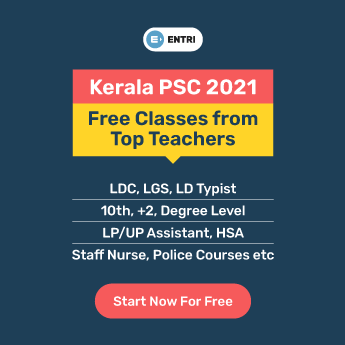 The exam will be written OMR based objective test with 100 questions. The maximum marks will be 100. And, each wrong answer will be penalized with 1/3rd of the marks prescribed for the question. The shortlisted candidates will be called for Physical Efficiency Test and physical examination. The successful candidates will be having document verification and interview.

Mental Ability and Test of Reasoning

Common Scientific Fact and  Important Scientific Phenomena. Other basic facts in the field of Science.

Constitution of India and Civil Rights

1. Name the state which has introduced a bill that proposes the creation of three state capitals

2. The vaccine used in the pulse polio immunization campaign in India :

3. The most abundant element in the earth crust is :

4. Which state launched the Yashaswini scheme for women entrepreneurship

6. India has the largest border with which country?

7. Who was the leader of the Chittagong armory raid?

8. Neither my brother nor my parents to the party.

(D) has been coming

9. Who is also known as Muthukutti Swami?

10. One who walks in the streets and sells small articles is a __.

12. Which is known as the Coromandel coast?

13. Gramasabha came to existence after which constitutional amendment