His Highness Sheikh Khalifa bin Zayed Al Nahyan, the President of United Arab Emirates and Ruler of Abu Dhabi, passed away on Friday, 13th May, 2022. He was aged 73. The announcement was made by the Ministry of Presidential Affairs. The Ministry has announced suspension of work in ministries, departments, federal and local institutions, and the private sector for three days, starting from Friday, 13th May. The UAE also announced forty days of official mourning starting from Friday.

“The Ministry of Presidential Affairs condoles the people of the UAE, the Arab and Islamic nation and the world over the demise of His Highness Sheikh Khalifa bin Zayed Al Nahyan, the president of the UAE,” a statement from state news agency WAM read.

Sheikh Khalifa bin Zayed Al Nahyan served as the President of the United Arab Emirates, the ruler of Abu Dhabi and the supreme commander of the United Arab Emirates Armed Forces since 3rd November, 2004. He took over the reins after the death of his father and then President His Highness Sheikh Zayed bin Sultan Al Nahyan. He was also the chairman of the Supreme Petroleum Council of UAE from the late 1980s.

Under the constitution, Vice President and Prime Minister Sheikh Mohammed bin Rashid al-Maktoum, ruler of Dubai, will act as president until the federal council which groups the rulers of the seven emirates meets within 30 days to elect a new president.

Sheikh Khalifa was born on 7th September, 1948, in Al Muwaiji Fort, 23 years before the establishment of the UAE in 1971, in the eastern region of the emirate of Abu Dhabi. He is the eldest son of the late Sheikh Zayed bin Sultan Al Nahyan, the country’s and his mother is Sheikha Hissa bint Mohammed bin Khalifa bin Zayed Al Nahyan. He belongs to the tribe of Bani Yas, which is considered to be the mother tribe for most of the Arab tribes that settled in what is known today as the UAE. Sheikh Khalifa received his primary education in the city of Al Ain, which was the administrative hub for the region. He was a graduate of the Royal Military Academy Sandhurst.

Sheikh Khalifa bin Zayed Al Nahyan was the second President of the UAE and the 16th Ruler of the Emirate of Abu Dhabi. He was first appointed as the Ruler’s Representative and Chief of Courts in the Eastern Region of UAE on 18th September 1966. This position was of a great significance in his life because during his tenure in Al Ain he received the opportunity to remain in contact with UAE citizens on a daily basis, and became aware of their needs, aspirations and hopes.

Sheikh Khalifa was appointed as the Crown Prince of the emirate of Abu Dhabi and as the head of defence department on the 1st of February 1969. He played a key role in the development of Defence force, turning it from a small force into a multifunction unit armed with the most modern equipment. As years passed, he donned several hats paving the way for the development of the emirate and ,later on, of the country.

Khalifa suffered a stroke in 2014, following which he was rarely seen in public. Since then, the affairs of the country is handled by his brother, Sheikh Mohammed bin Zayed Al Nahyan. 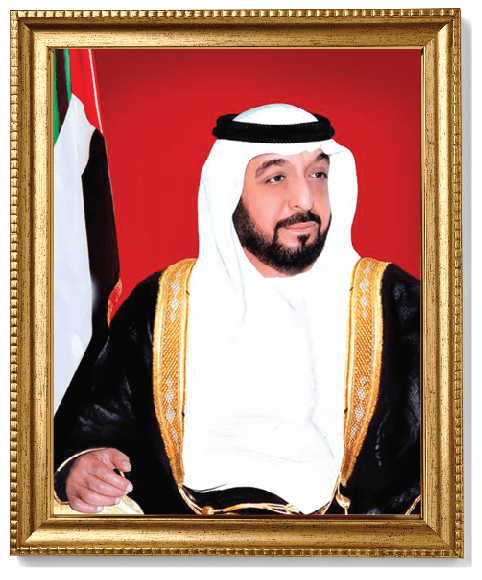 Sheikh Khalifa’s character and ideals are based on his father from whom he gained knowledge and experience. During his tenure as President of the Executive Council, Sheikh Khalifa supervised and followed up on development projects across all parts of the emirate of Abu Dhabi. His Highness gave considerable attention to the modernization of infrastructure projects as well as development of various services. He also strived to build a modern administrative apparatus, and fully integrated legislative regulations, identifying them as fundamental to the social and economic development process.

One of the major development initiatives of profound social impact made by Sheikh Khalifa was the establishment of social services and commercial buildings department, commonly known as ‘Sheikh Khalifa Committee’. Activities of the department contributed to the development of construction activities in the emirate of Abu Dhabi.

After assuming charge as the President of UAE, the first strategic plan for the government of the UAE was launched under his reign. In addition, Sheikh Khalifa also launched an initiative for developing legislative authority in order to modify the technique of selecting members of the Federal National Council combining the process of election and appointment as a first step. This was aimed at providing an opportunity to select members of the Council through direct elections.

Sheikh Khalifa was a strong supporter of the Gulf Cooperation Council, believing that the success and achievements of this body reflect the depth of understanding reached amongst its leaders.

Sheikh Khalifa had a great love for sports activities in the UAE, especially football. He supported and honored the local sports teams that achieve local, regional and international recognitions and championships.

The citizens and residents of UAE are deeply saddened by the demise of the great ruler. The country has lost it’s righteous son and courageous leader. Sheikh Khalifa took utmost interest in interacting with the Emaratis and working for the development of all aspects of the country. May his soul rest in peace.

Entri App provides a great online platform for all those aspiring to appear for various bank exams, government exams and other competitive exams. Our team of experts provide short and precise video classes which helps in learning the concepts. Users get access to flash cards and quizzes and can attempt unlimited mock exams with the same pattern as that of the real exams. We also provide PDFs of previous years’ question papers with solutions. So kickstart your exam preparations with Entri App!

What Are Machine Learning Applications by Google?