International days are marked to educate the public on issues of concern, to address global problems and to celebrate and reinforce achievements of humanity. Each international day provides the community an opportunity to organize activities related to the theme and to create public awareness on the same. Organizations, governments, public and private sectors, schools, universities and citizens make international day a springboard for awareness raising actions. In this article let us check on the Engineer’s Day 2020 in India, History, Activities and Quiz

Engineer’s day is one of the most significant events that is celebrated in India The day is dedicated to all the engineers who changed the world with their creative innovations. From the invention of the wheel to the modern day drones, engineers have provided the vital push for the progress and development of technology. The day is celebrated to salute the contribution of the engineers towards society.

India marked September 15 as engineer’s day to appreciate the contributions of Mokshagundam Visvesvaraya who was born on September 15, 1861 in a village called Muddenahalli in Karnataka. A Bharat Ratna awardee, Visvesvaraya had studied Bachelor of Arts (BA) from the University of Madras and pursued civil engineering at College of Science in Pune.

Engineer’s Day Around the World

Following are few activities that can be organised to appreciate and highlight the works of engineers.

1. At schools students Engineers week can be organised with various activities and competitions. Activities like robotic competitions, lego design building, projects out of recyclable materials and various STEM competitions can be conducted to explore the little engineers creativity and talents

2. Various Competitions like hackathon can be conducted at engineering colleges to enable the students to utilize their skills to the best of its ability. Workshops can be organised by engineering students inviting the high school students and helping them learn more about the scope for engineering.

3. Career fairs can be conducted exclusively for engineering field and helping students figure out which branch of engineering can be selected by them based on their passion

4. Identify the engineers in your family and friends circle and let them know their value in the society and also appreciate their works

5. Encourage women in Engineering. Give students examples of female engineers such as Debbie Sterling, the founder of GoldieBlox. Give support to the female engineers around and help them in achieving their targets if they need support from others

6.  Use social media platforms to provide public recognition to the engineers across the world and also create awareness to the society about great achievements of the engineers

7. Organisation and offices can conduct activities to encourage and appreciate the little innovative minds among them.

A) The Golden Gate Bridge, US

B) The Sydney Harbour Bridge, Australia

Answer: b) The Sydney Harbour Bridge is the widest long-span bridge in the world. Including two rail tracks, eight car lanes, a cycleway and pedestrian footway, its total width is 48.8m. The world’s longest bridge is the Second Lake Pontchartrain Causeway, which stretches over 32km across a lake in Louisiana, US. The longest suspension bridge is the Akashi Kaikyo Bridge in Japan, which opened in 1998, and is 1990 metres long.

2. Name the location of this engineering marvel. 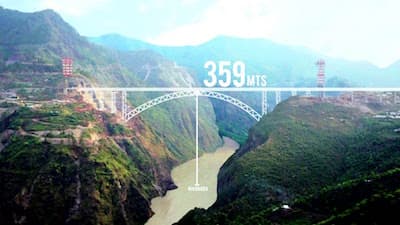 Correct Answer: Jammu and Kashmir
Explanation: It’s the Chenab Bridge!
It’s a railway steel arch bridge under construction between Bakkal and Kauri in the Reasi district of Jammu and Kashmir in India. When finished, the bridge will span the Chenab River at a height of 359 m (1,178 ft) above the river, making it the world’s highest rail bridge.

3. Who was the First Indian scientist who got the nobel prize in 1968 for deciphering the genetic code?
Correct Answer: H.G. Khorana
Explanation: The 1968 Nobel Prize for Physiology or Medicine was awarded to Har Gobind Khurana with Marshall W. Nirenberg and Robert W. Holley for research that showed how the order of nucleotides in nucleic acids, which carry the genetic code of the cell, control the cell’s synthesis of proteins.

4. What is the world’s tallest free standing structure?

Answer: b) The CN tower, Toronto, Canada is the tallest freestanding structure in the world (554m to the top of antenna) – although newer and taller ones are under construction. The highest building debate continues to rage with most of the world’s tallest structures radio or tv broadcasting towers. The highest supported structure is the KVLY-TV mast in Dakota, US (629m). The Taipei 101 is the tallest habitable building (509m to top of spire). The Sears Tower is 527m to the top of its antenna. The highest structure built at sea is the Petronius Platform, an oil rig in the Gulf of Mexico that is 610m high but only 75m above sea level.

5.  What are the tiles of the Sydney Opera House made of?

Answer: d) Glazed granite. The glazed granite tiles are robust and self-cleaning, but periodically need to be replaced. In 2003, a $151,000 clean up of the opera house’s highest sail was commissioned to remove the slogan ‘No war’ painted in protest of the commencement of the Iraq War.

6. What is the tallest residential building?

B) West Point Tower, the Netherlands

Answer: a) Q1, Australia. The 80-story Queensland Number One or Q1 at Surfer’s Paradise on the Gold Coast is currently the world’s tallest residential building at 323 metres, but will shortly be overtaken by structures nearing completion in Dubai (Princess Tower, 23 Marina) and superstructures planned for the distant future in Tokyo.

7. What is the largest hole ever dug in the Earth?

A) The Panama Canal, Panama

Answer: b) Kennecott’s Bingham Copper Mine in Utah is the largest open pit mine in the world and the largest human made excavation. Over 4 km in diameter, it represents the removal of more than 15.3 cubic km of Earth. At 1000m depth the Big Hole diamond mine in Africa is the deepest hole dug in the Earth. The West Edmonton Shopping Mall is one of the world’s largest shopping malls and covers 0.5km sq.

Few important international days and its significance by Entri.