Who is Ales Bialiatski? Profile Here 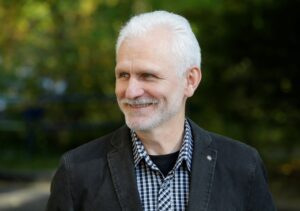 Ales Bialiatski is a Belarusian civic leader and prisoner of conscience known for his work with the Viasna Human Rights Centre. Bialiatski was born in Vyartsilya on 25th September 1962. He received the Right Livelihood Award in 2020, also referred to as the “Alternative Nobel Prize.” Along with Memorial and The Center for Civil Liberties, Bialiatski received the 2022 Nobel Peace Prize. Bialiatski completed his from Homiel State University in 1984 with a degree in Russian and Belarusian Philology. He served in the military from 1985 to 1986 as an armored vehicle driver in an anti-tank artillery unit close to Yekaterinburg (then Sverdlovsk), Russia.

Bialiatski and Viasna received the 2005 Homo Homini Award from the Czech non-profit organization People in Need in March 2006. This award honors “an individual who is deserving of significant recognition due to their promotion of human rights, democracy, and non-violent solutions to political conflicts.” In 2006 Bialiatski received the “Andrei Sakharov Freedom Award” from the Norwegian Helsinki Committee. In 2010, Genoa (in the Italian region of Liguria) named Bialiatski an honorary citizen.
Human Rights National Honor Award. Belarus was named the 2011 Human Rights Activist of the Year. In 2012 Bialiatski won the Lech Wałęsa Award for “democratisation of the Republic of Belarus, his active promotion of human rights and aid provided for persons currently persecuted by Belarusian authorities”. He shared the Right Livelihood Award in 2020 with Nasrin Sotoudeh, Bryan Stevenson, and Lottie Cunningham Wren, which is referred to as the “Alternate Nobel Prize.” Bialiatski was one of the Democratic Opposition of Belarusians honored with the Sakharov Prize by the European Parliament in December 2020. Bialiatski received the 2022 Nobel Peace Prize, along with Memorial and The Center for Civil Liberties, in that year.
Share61SendShare