by Samia Miraj
in Articles, MPPSC, Other Government Exam 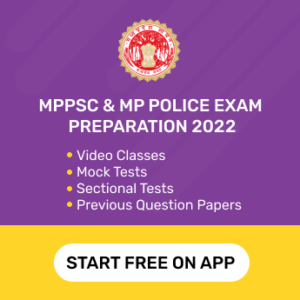 Madhya Pradesh Public Service Commission, MPPSC has released the official notifications for State Services (Rajya Sewa Pariksha) & Forest Services Examination 2022 on the official website https://mppsc.nic.in/. The MPPSC 2022 Notification has been released on 22nd December 2021. The MPPSC Prelims 2022 is to be held on 24th April 2022 and MPPSC Prelims Admit Card is to be made available from 15th April 2022 onwards.

The preliminary examination will consist of two papers. Each paper will be for two hours and the total marks of each paper will be 200. The candidates will have to first qualify for the preliminary examination in order to give the mains examination. The main examination will consist of four papers and the candidates will also have to give a written essay in the Hindi language. Finally, the personality test will be conducted which will be 175 marks. You can check the MPPSC exam pattern given below:-

Important features, events and their official, Social and Economical Systems of Ancient and Medieval India.
Cultural and Religious Reform movements in the 19th and 20th century.
Independence conflict and the Indian National Movement for Freedom.
Integration and Reorganization of India after Independence.

Paper I – General Studies I

Q- How many papers will be conducted in the MPPSC mains examination?

A- A total of four papers will be conducted in the MPPSC mains examination.

Q- How many papers will be conducted in the MPPSC prelims examination?

A- There are a total of two papers that will be conducted in the MPPSC prelims examination namely the General studies paper and General aptitude paper.

Q- What is the selection procedure for the candidates in MPPSC recruitment 2021?

A- The selection procedure of the MPPSC recruitment 2021 consists of three stages namely preliminary examination, main examination and interview.

Q- What is the upper age limit to give the MPPSC State Service examination?

A- The upper age limit to give the MPPSC State Service examination 2021 is 35 years. The age limit is relaxable for certain categories.

Entri provides an efficient platform to all of the applicants of Government examination so that they can excel in their respective courses. The candidates can also attend video classes from our experts so that they can achieve success within no time. Sample papers and mock tests are available on our platform which helps the candidates to prepare for the examinations beforehand. A wide range of experts is available at Entri who provides top-notch video lessons which are available for free to all of the applicants. Start today and achieve success with Entri!