In this article, we are providing you the new and repeated patterns of questions from Syllogism portion. The verbal ability portions are important and are included in the Reasoning section. This section is simple compared to the other sections. The syllogism is based on the logical analysis of statements and conclusions given. Candidates have to understand the statement and analyze it answer accordingly. Let us practice some syllogism questions for IBPS PO, Clerk examinations.

The Syllogism is an unavoidable topic in the Reasoning part of almost all government competitive examinations. These questions can be a little bit confusing for the candidates. However regular practice will surely help to sort such issues. For all banking exams, 4-5 Syllogism questions can be expected in the Prelims stage.

Positive(All and Some) and negative(Some and Some not) terms are complementary to each other- All-No and Some-Some-not. These can be negated at conclusions with negative qualifiers.

The new patterns of questions always contain new synonyms of qualifiers in order to confuse the candidates. Check these synonyms:

These types of statements are analyzed either through Rules or by drawing Venn diagrams. Venn diagram method is a more reliable and easy method. Using the Venn diagram all possible logical relations and visualizations are drawn connecting the finite terms. And thus reach conclusions and candidates have to decide which one is true or false.

Statements: All pens are rubbers. All rubbers are pencils. Some pencils are scales.

Draw the basic diagram according to the statements given. Now candidates can answer the positive terms among the conclusions just by checking and comparing the basic facts drawn. And also extend the diagram towards possibilities without encroaching the data given in the statements. 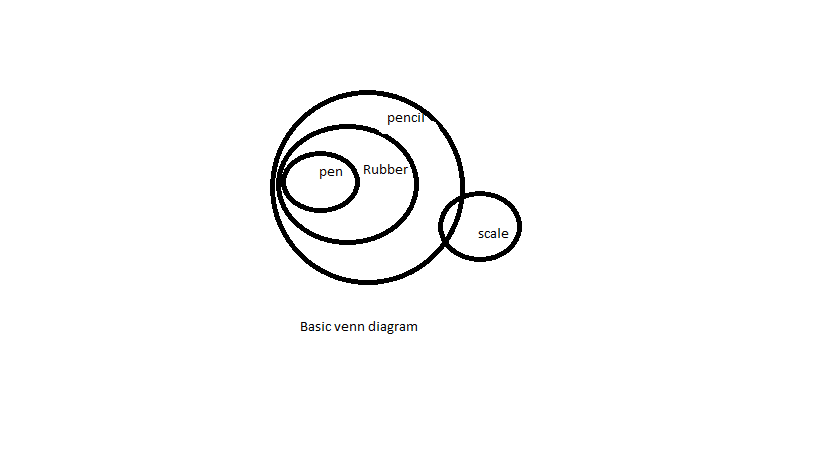 So, as per Statements and diagrams, check the conclusions

For positive conclusions just check the basic figure and if it follows, the conclusion follows and vice-versa.

(iii) This is a negative conclusion and follows in the basic Venn diagram drawn now. So, one should negate this with compliment Some. And further, check for alternate possibilities. Here we can have “some” relations with these two terms without encroaching the data given in the statements, and hence conclusion does not follow the statements given.

(iv) Again it is a negative conclusion and false in the diagram. Hence it also does not follow.

Statements given below are followed by conclusions. Read carefully and decide which of the given conclusions logically follows from the given statements disregarding commonly known facts.

(2) if only conclusion II follows

(3) if either conclusion I or II follows

(4) if neither conclusion I or II follows

2. Statements: Ram is big. No big is tall. All tall persons are fair.

Now practice more Syllogism questions for IBPS PO and Clerk, click on the link provided below.