Twitter is flooding with the #ssc_scrapufm and #sscufm. The controversy is around the SSC UFM rules. Ever since the SSC CHSL, descriptive paper results are out in February candidates are demanding clarifications from the commission. More than half of the aspirants scored low or null even after showing better performance in the descriptive paper. The newly introduces SSC UFM rules are making it hard for the aspirants.

SSC introduced the UFM (Un Fair Means) marking strategy in the SSC CHSL, and SSC CGL descriptive paper.  Hundreds of candidates scores zero or low marks despite being excelled in their writing skills, all thanks to the new UFM rules. Candidate’s descriptive paper is now evaluated, and value their responses according to the previously agreed rules. But these same rules are now backstabbing the candidates. There are rules and formats for the word count, writing style, paragraph creation, etc. In all these areas human error is unavoidable, and unless you are exceptionally smart. The evaluators according to its preprogrammed style, evaluates the answers and it leads to a very low scoring pattern for the majority of the candidates.

Important UFM rules which cause a low scoring among the aspirants are:

While some of these rules are included to improve the transparency, and fair conduct of the exam some others are causing troubles. In the recently published SSC CHSL Descriptive paper results, hundreds are disqualified only because they used some random imaginary name and address while answering a question for writing a letter. The basic format for the letter requires a name and an address. The aspirants had used imaginary names like ABC, XYZ, etc. in the answer copy, and by the SSC UFM marking system awarded zero marks to them.

SSC’s Response to the UFM Controversy

Now hundreds are protesting against the unfair valuation of the SSC. #SSCUFM, #ssc_scrapufm hashtags are trending on twitter. Candidates are demanding evaluation and scrapping of the UFM rules. Since the number of complaints is increasing, the SSC Chairman has finally assured the candidates that the commission will look into the matter. SSC chairman Mr Braj Raj Sharma had said that the Commission will look into this matter once the COVID-19 Lockdown gets lifted. Mr Chairman said that SSC has received numerous complaints and enquiry from the candidates who appeared for the SSC CHSL Tier-II Descriptive exam since the response sheet is published. He assured the candidates who got Zero marks because of the Un Fair Means (UFM) about a possible revisit on this controversial rule. Whether SSC will scrap the UFM rules or not is yet to know. SSC is yet to make any official announcement regarding this controversy.

Check some of the tweets raised by the candidates against this UFM controversy. 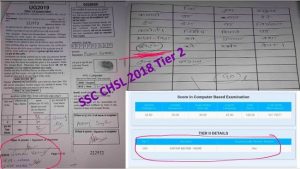 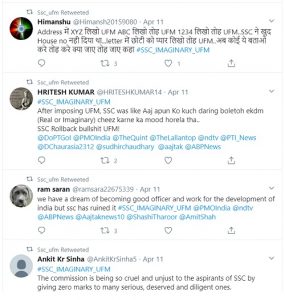 Entri wishes you all the best for your upcoming examinations.  Start your Preparation today with us. Entri will help you with thousands of questions. Attempt mock tests, analyze yourselves to improve your success rate.