The Staff Selection Committee (SSC) was formed in 1975 and since then have been recruiting many people to work in the government through their exams like SSC Common Graduate Level (CGL) and SSC Combined Higher Secondary Level (CHSL).

SSC CGL offers more than 15 different posts with more than 5 different pay grades ranging from Rs. 1,51,100 tp Rs. 25,500. A single candidate can apply for multiple posts as long as he is eligible. For CGL, the candidate must at least have a bachelor’s degree to apply. The exam is conducted in 4 different stages called tiers.

The SSC CGL exam syllabus 2020 is as follows:

Start your practice for the upcoming SSC exams here!

Tier III: This exam is a descriptive exam to evaluate a candidate’s Language skills in Hindi/English. This is only for candidates appearing for Statistical Investigator ( Grade II) & Compiler.

Tier IV: This test comprises of Data Entry Speed Test & Computer Proficiency Test. This exam is for candidates appearing for specific posts under the Government of India.

The eligibility criteria for the SSC CGL Exam is as follows:

SSC CHSL is designed to suit 12th pass students as the full form suggests.  The pay scale here varies from 19,900 to 81,100. In contrary to the latter, this exam is conducted in only 3 tiers. The first is a computer-based then a descriptive paper and finally a skill-based exam. The SSC CHSL Syllabus covers a wide range of topics on a variety of subjects. The syllabus for the SSC CHSL Exam may vary from tier to tier.

The syllabus for this year’s exam is as follows:

Tier I: The topics in this section will be related to General Intelligence and Reasoning, General Awareness, Quantitative Aptitude, English Language.

Tier II: This is a descriptive exam where a candidate’s writing skills will be put to the test. Candidates will be asked to write applications and essays on various topics like Economic reforms, national securities etc.

Tier III: This tier consists of a Data Entry Speed Test & Computer Proficiency Test. This test is compulsory for those candidates who have applied for the post of DEO and DEO (CAG).

Get a head start on practicing for the upcoming SSC exams here!

Here is the normalisation formula: 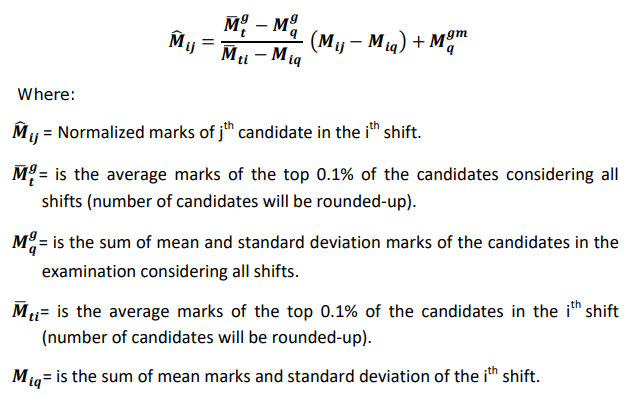 Complicated? Here is a simple example.

If you still don’t get it, don’t worry. Point is normalisation increases/decreases your marks based on cut off, average and difficulty to make the exam seem fair even though it may not make a huge difference sometimes. Like how in the example the candidate only got 0.92 marks extra. But sometimes, normalisation could be why you get a distinction or higher. It could be your saving grace but can also be your bane.

So that’s the gist of it. The Entri App helps you prepare enough so normalisation isn’t that much of a deal and you are well prepared and confident enough. Start today! keep learning and have a nice day 🙂

Tips and Tricks to Solve Syllogism Questions for Bank Exam