The important dates for the SSC CPO Exam are as given below:

The SSC CPO Online mock test is available here. Attempt here to get an idea of the questions that appear for the examination. For SSC CPO practice set PDF check the end of the article.

1. Battle of haldighati in year 1576 was fought between?

5. A 7 metre long piece of cloth is cut into three smaller pieces. How long is the longest of the three pieces? Given that

6. Select the option in which the numbers share the same relationship as that shared by
the given pair of numbers. 76 : 171

8. Select the most appropriate synonym of the given word.
FASCINATING

9. Who became the Nawab of Bengal after the death of Alivardi Khan in 1756?

11. which of the following is not an inner planet?

12. Which of the following pairs of numbers and signs, when their positions are
interchanged, will correctly solve the given mathematical equation?

13. Select the odd words/numbers/letters/pairs from the given alternatives.

15. when was the national anthem of India adopted by constituent assembly?

17. The information collected through a survey conducted among the public is represented in the Venn diagram given below. Study the diagram and answer the question.
Which of the following represents Govt. servants who are tax payers, but are neither females nor graduates? 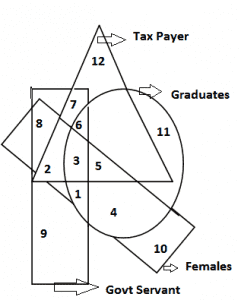 18. How many polities does the institutional mechanism of federalism accommodate?

19. Which Commission was appointed by the central government to examine issues
related to Centre-State relations?

20. Select the most appropriate word to fill in the blank

22. The first port to be developed in Gujarat after independence

25. Who was architect of humayun”s tomb situated at delhi?

They say practice makes perfect, and when you look to the habits of professional athletes, musicians and actors, it’s easy to see why. Psychology writer Malcolm Gladwell once espoused the 10,000 hour rule: only after 10,000 hours of practice does a person become an expert in any field. While you may not need 10,000 hours of practice to crack the SSC CPO exam, there’s no denying that completing practice tests can help you achieve better results.

Mock test will have questions in the exactly similar pattern as to the main exam. Questions are in the same format and you need to solve in same time limit. Solving mock test gives you a perfect idea about the actual exam.

Entri also provides you a platform to appear for the mock tests in a very effective manner. Do not miss to give a try.

Degrees of Comparison with Examples